Waiheke has some great mountain bike trails thanks to a group of hardy pioneers who love nothing better than whizzing down hair raising trails, writes Alex Stone.

Thanks to the nice folk at the Waiheke Weekender / Waiheke Gulf News for letting us republish this article!

For many, there’s the enduring attraction of dirt. It’s irresistible. And the outdoors. And fresh air therapy. And good honest workouts. For a growing number of Waiheke Islanders – and visitors to our shores – mountain biking offers all of the above, with some added bonuses.

The Waiheke Mountain Bike Club is the hub of all off-road cycling activity on the island. Theirs is a story of a few hardy pioneers with an unstoppable vision, countless volunteer hours cutting and refining tracks, an annual event growing in stature, and perhaps most importantly, plenty of heart-warming parent-child bonding times; messing around with bikes is fun for the whole family.

Mountain biking seems to be for all those people who never grow old on the inside.
When Vaughan Lowe arrived on Waiheke 12 years ago, he’d already spent 20 years building mountain bike trails in Woodhill Forest, west of Auckland. He’s one of those fanatics who is fun to meet. The glint in his eye, the unflagging optimism, the infectious grin, the larrikin attitude, the commitment to his sport. Good bloke.

So typically, predictably, he rounded up a few mates, and they started making mountain bike trails at Onetangi Sports Park in the Rangihoua Reserve. An epic battle with gorse ensued. Old man gorse. Great Wall of China gorse. Bigger than Ben Hur gorse. They (the bikers) won. Well, sort of. And are still busy winning. But alongside that hardy weed, the trails, of differing degrees of difficulty and thrill factor, are now well established. Those originals deserve honorable mentions: they were islanders Mark Seavill, Damien Clarke, Peter Baigent, Patrick Pheifer and Vaughn. Ten years ago, this keen group started the Waiheke Mountain Bike Club, which must surely have been a challenge.

How do you corral a bunch of rugged individualists? Actually not a problem at all. They all wanted some place to go riding. The club quickly built a solid membership base, and now reach about 300 riders on its Facebook page [and Facebook Group].

Its annual biking event around Rangihoua Hill, the Rangihoua Challenge, (more on that later), is always very popular, with plenty of riders coming from the city.

The Mountain Bike Club secured a $40,000 grant from the Waiheke Local Board – all of which went into refining the system of tracks up and around Rangihoua Hill, the commanding pa site at Onetangi Sports Park. In the initial set-up of the trails, the bikers shared only a 200m  section of a bridle path, leading to the first mountain biking set-off point.

The trails range in grade difficulty from 1 (the easiest) to 4 – with grade 5 being the most difficult you can get.

And the club’s volunteers are right now re-working the family trail, and building a new Piwakawaka Trail, named for the friendly bird that flutters about watching their work in a executive overseer capacity.

These tracks were initially intended as ‘single trails’, meaning for mountain bikes only, but Vaughn reckons the secret couldn’t last. “Runners and walkers in general have grasped our trails, and they love them. The Harriers (a Waiheke running group) in particular, use them a lot – they love the curves, the gradients, the fact they’re off-road.”

As the network of mountain biking trails expand on the island – a few will be going into Whakanewha Regional Park too, next year – they will more likely become ‘multi-use’ trails, shared with runners, walkers and horse riders. The new trails will also all be baby-buggy friendly. While creating them, the mountain bike guys also get involved in native tree plantings, working in with island environmental restoration groups.

But it wasn’t all just spade work for the originals. They were doing this for a purpose, and inevitably, rivalry sprung up between the cyclists.

Clubs are also about competition. Whose bike is the fastest? Which rider can best negotiate the toughest trails? The top few riders on the island will all point at each other: Damien Clarke, who now rides at a very high level in competitions off the island; Patrick Pheifer, who otherwise pilots a commercial airliner, so navigating the Rangihoua trails on two muscle-powered wheels must be a refreshing alternative; photographer Roger Whitefield, who also repairs bikes at his Tahi Road business Wai Bikes, after the inevitable tumbles.

We need an event to keep us up to the mark, these guys decided. So the Rangihoua Challenge was born. This year, on 5 December, it will be the ninth time the event has been run. Starting life as a three-rider relay race with a 5km loop connecting almost all the existing trails, the event has now become significant on the island’s sporting calendar.
Each rider rides a single loop at a time and riders change over by tapping his/her replacement on the top of their helmet. Now you can also do the race solo and there are prizes for different categories; boys, girls, women, age groups, single speed.

What’s single speed? Vaughn has to back-pedal a bit to explain. “It’s just like life, mate: mountain-bikers go through stages. First we get gears, lots of gears, and all we want to do is climb hills. You just want to go uphill all the time.
“Then you say, nah, gears are too complicated, so you go single speed. Just one gear, no derailleur. It’s kind of like chasing pain. Then full circle. You go back to gears, when you get some sense.”

Okay. Got it. So where is he in this cycle I wonder?

“I stayed with gears.” He grins. “I’m more of free-riding guy – I just enjoy the trails, and look for some jumps along the way.”

The Challenge has proved that islanders know their own turf, with about 80% of the prizes going to local riders. Vaughn insists that I mention the sponsors of the event: The Oneroa Wine Centre, Passage Rock Vineyards, Fullers Ferries and SeaLink Ferries.

Vaughn is an advocate for not riding on busy Waiheke roads. “Our main road from the ferry – it’s our motorway,” he says. The Mountain Bike Club has designed a trail, keeping way from the main road,that will take you right around the island, which is a work in progress. “Without them, mate, we just wouldn’t have it.” The club also focuses on those just climbing into the saddle.

Auckland Council parks officer, and cycle enthusiast Gary and islander Simon Harvey offer Bike Sundays where they introduce children “from five to 55″ to the joys of mountain biking. Free of charge.

“We concentrate on speed, skills and safety,” says Gary. “It’s all about building confidence, so our young people can enjoy bikes on and off the road.”

In winter, the Sundays happen at the bike trail the club built around the sports field at Te Huruhi Primary School, but later in the spring, when the earth dries out, they’ll move back to Onetangi Sports Park. Another big vision is to establish a big new event, probably to be called The Great Waiheke Race, cross country from Man o’ War Bay to the Onetangi Sports Park and back. To this end, the club is looking at becoming a trust so it can raise and manage funds.

Vaughn would also like to see Waiheke promoted, from a cycling perspective, as “the doorway to the Coromandel” and linked to the National Cycleway. “It’s a lot better than cycling along the motorway and across the Hauraki Plains to get the there,” he observes.

As for the unique selling proposition of off-road cycling on Waiheke he says: “We’re only half an hour from the central city, and you can get some great cycling in. You can work up a sweat, then cool off at Onetangi Beach. You can follow your mountain biking with some good Waiheke wines. That’s a great package, I reckon.”

Another exciting event on the mountain bike horizon involves the club applying to host the New Zealand Single Speed Champions ships in 2016. That will see us hosting hundreds of hard-case riders, including some of our own. And it should make for great spectator sport.

Speaking for myself, and to paraphrase Ogden Nash, “There’s nothing I like so much as a garden, that someone else pedals hard in.”

Visitors on a hot day to Waiheke must sometimes wonder whether it would be more realistic for the maps of the island to be presented all crumpled up – rather than flat and tidy in the brochure racks.

It’s a smallish island, yes, but not exactly a flatt-ish one. But if you’re a mountain-biker and staunchly unafraid of hills, perhaps none of that matters. Incidentally, the advent of the electric bike for hire on the island has mitigated some of the problem with the tough uphill slog. And apparently in the world elsewhere, electric bikes have made their way into the mountain biking arena – but with some controversy. Last year the Wall Street Journal, no less, published a piece titled, The fight to ride electric mountain bikes on the trail.

“They’re too fast,” says Vaughn dismissively. Many trails overseas ban the use of electric-assisted bikes. They’re kind of like cheating, I agree, even from the perspective of someone focused on, er, economy of effort.

Biking is about fun, pure, simple fun. As for hills, and from the perspective of someone on two wheels who is (finally) atop them, they present the prospect of even more fun. Who can resist the exhilarating freedom swish of wind in your hair, and the silent hurtling of a bike making a date with gravity? A bike – and a mountain bike especially – gives that all to you.

Vaughn and I have been having coffee at Delight Café in Oneroa.

As we leave two active retired couples arrived for breakfast, all kitted out in professional-looking lycra for a day of mountain biking on the island.

“See?” said Vaughn, reflecting the heritage of how mountain-bikers always share the delight of rediscovery. “We did that.” 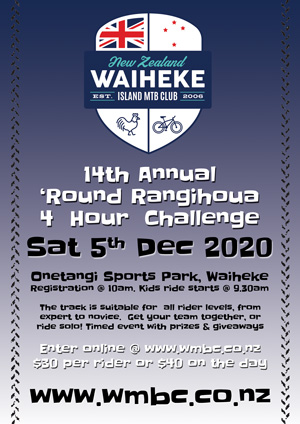